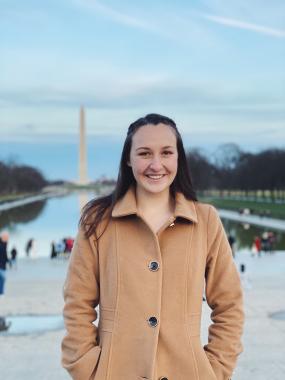 Interning is a great opportunity to obtain work experience, increase marketability after graduation, and clarify future career plans. Interning in Washington, DC is especially important for students wanting to build a career in the nation’s capital.

A great number of Nunn School students and alums have interned in Washington, D.C. at think tanks, nonprofits, and federal government agencies. Being in the capitol means endless opportunities to engage in networking and discussions. Many returned to DC for jobs and have worked at places such as the Department of Homeland Security, Office of the Secretary of Defense, and Office of the Director of National Intelligence.

Molly Weston, a fourth-year International Affairs student, interned in Washington, D.C. in the spring 2020. Weston was an intern on the Material Risks Management team at the Nuclear Threat Initiative. During her time in D.C., Weston shared her thoughts below.

What are you doing and how have you been able to apply the skills you've developed through our program?

I am currently interning for the Nuclear Threat Initiative, an NGO in D.C founded by Senator Sam Nunn and Ted Turner. I work on the Materials Risk Management team where I am focusing on efforts to secure nuclear and radiological risk materials from sabotage and terrorism. Specifically, I am working on research and data analysis for the biennial Nuclear Threat Index where NTI ranks every country in how effectively their risk materials are protected. I am also working with my team members in efforts to remove radiological materials from the Donbas region in Ukraine.

Georgia Tech has allowed me to be technically literate and appreciate the integration of social and hard sciences. At the Sam Nunn school, I was able to conduct research on arms control and counter terrorism techniques, a project that would not have been possible without an understanding of the role technology plays in international affairs. NTI, in my opinion, is the epitome of that nexus and demonstrates the power that comes with cross disciplinary thinking. I would not be able to do my job if I did not know how to code, the science behind radiological isotopes and fuel cycles, and the societal implications of technology

How do you see this internship helping with your future career goals?

This internship will open so many doors for me and my future career. Being in D.C and having the ability to attend events at think tanks and on the hill has already introduced me to so many connections and opportunities. But specifically at work, I have the opportunity to be mentored by some of the nuclear industry’s top minds and advocates. My boss, Ambassador Laura Holgate served on President Obama’s National Security Council and was one of the key architects for the JCPOA. She has introduced me to so many influential people in the community, both those who work for the government as well as the private sector. My other team members have worked in various capacities for the IAEA, the Belfour Center, the Center for Nonproliferation Studies at Monterey, the Department of Defense, and have shared so much insight with me on their careers and steps I can take to further mine. But beyond the networking opportunities, the projects I have been a part of have allowed me to advance my portfolio from university research to implementable policy and international dialogues that generate action at the government level. The Nuclear Security Index is the only report of its kind and is utilized by countries all around the world to drive their security structures and cultures around nuclear materials. I am also helping with a workshop in the UAE later this spring that will deal with the safety of their new live reactor, and getting the opportunity to travel there and speak Arabic will be incredible.

What have you learned so far?

I have learned so much just in the short time I have been in D.C. Most importantly, I have learned how to handle and adapt to an insane learning curve. Coming into NTI, I was expected to be able to follow, participate, and contribute to high level meetings with government and private officials regarding extremely technical topics in nuclear and radiological security which demanded a lot of preparation on my part. I had to teach myself not only about nuclear fuel cycles and the risks of medical isotopes and dirty bombs, but additionally all of the stakeholders both domestically and internationally that we have close partnerships with. But besides having to accustom myself to the acronyms and terminology of the nuclear community, I’ve learned how to juggle five different, extremely time sensitive projects at once and still produce high quality work. I’m the youngest intern by four years, and many of my peers here have two degrees on me (most of which are from top institutions like Georgetown and Harvard). The caliber of work that is demanded from us is immense and I’ve had to learn how to produce it despite my age and experience.

D.C is such an amazing city to work in, but it is also a great place to be as a college student. I’ve gotten really close with the other interns at work, and we love to go out to eat after work or go to museums on the weekends. I also live in a big row house on capitol hill with 10 other interns, and it’s been an amazing experience having so many young people around. We like to explore the city together and debate about politics and what not. I’ve also gotten to spend time with a lot of students from the D.C universities which has been a great way to meet new and interesting people my age. I also really enjoy running and have been exploring the city on runs on the weekends.