The second event of the 2020-21 Sam Nunn Bank of America Policy Forum Series began with introductory remarks from former Senator Sam Nunn. He questioned what actions America should take in response to Russia and China, in partnership with Europe. Senator Nunn challenged whether we should treat sustained diplomacy with Russia and China as a reward for good behavior or if we can carve out existential threats for a sustained dialogue. However, he noted how the vastly different values among states would come into play.

Ambassador James F. Collins is the nonresident senior fellow for the Russia and Eurasia Program and Diplomat in Residence for the Carnegie Endowment for International Peace. He also served as the US ambassador to the Russian Federation from 1997 to 2001. The Honorable Federica Mogherini serves as the rector of the College of Europe and was formerly the high representative of the European Union for Foreign and Security Policy, along with the vice president of the European Commission. 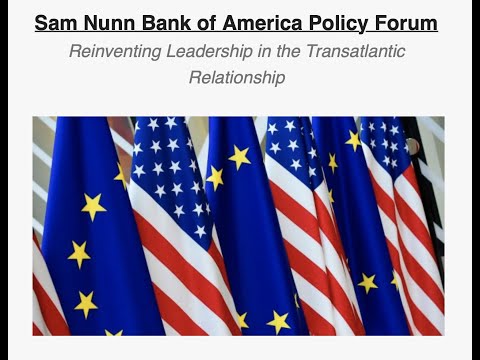 Ambassador Collins and the Honorable Mogherini discussed the potential for a new and improved transatlantic relationship. Collins stressed the importance of Russia’s role in the transatlantic relationship and the consistent challenge the country has presented. The presence of Russia has led to the creation of many international institutions. The Ambassador urged the United States to work with its allies and convince the global community to move in constructive directions. Russia seeks to reassert its position as a global leader, increasing its international participation. It is no longer just about the nuclear powers; the global community must work together to have an important outcome. The ambassador continued to describe how we are now engaged in a new systemic and ideological competition with Russia. Russia is depicting itself as an alternative to globalization and the current world order, and we face a genuine challenge to the future of global governance.

Mogherini echoed similar sentiments, stating how we must get ready to rebuild the transatlantic relationship. However, trust has been lost, and while Europeans missed America, they still have interests they need to serve and protect. She described the mix of happiness and relief Europe now feels, along with a rush to coordinate. Mogherini expects a shift of values to a focus on human rights, in addition to a shift towards a multilateral approach. Collective leadership is a requirement, more today than ever before. The looming threats from Russia and China must be dealt with as allies, the transatlantic relationship growing in importance.

Ambassador Collins and the Honorable Mogherini were in agreement that cooperation is no longer optional. If global threats are to be dealt with efficiently, Europe and the United States must work together and repair the damage that has been done to the transatlantic relationship. There are two more events in the Sam Nunn Bank of America Policy Forum Series, so make sure to be on the lookout for news regarding the next part of the series!